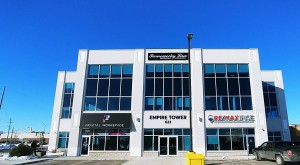 Tarnowecky Law is a family run business that has been serving the Kingston community and surrounding area for over 40 years. Tarnowecky Law is dedicated in providing high quality legal services to individuals, businesses and organizations across Ontario.

Yuri received his Bachelor of Arts from Guelph University, attended Queen’s University Law School and was called to the Bar in 1975. He has been practicing law in Kingston for over 45 years. His expertise includes residential and commercial real estate, wills and estates. Since moving to Kingston in 1969, Yuri has been an active member of the Kingston Community:

Ivanna Tarnowecky graduated from Regiopolis-Notre Dame in 2007 as an Ontario Scholar with a degree in French Immersion and an International Baccalaureate Degree. Ivanna received her Honours Bachelor of Arts from the University of Toronto majoring in Book & Media studies with minors in both French as a Second Language and Cinema Studies. In 2012 Ivanna attended Bond University for her law degree and subsequently graduated in 2014. Ivanna was called to the Bar in 2015 and has been practising ever since.

Brad is a native of Windsor, ON. Brad received his Honours Bachelor of Arts degree from McMaster University majoring in Political Science and Canadian History.  During his undergraduate years, Brad was a member of the McMaster varsity football team, and a proud member of the Vanier Cup winning national champions in 2011. Brad obtained his law degree from Queen’s University Faculty of Law in 2016 and was called to the Bar in 2017 and has been practising ever since.

Yuri Tarnowecky has been practicing law for over 39 years. He has maintained a successful independent law practice since 1975 in the City of Kingston, Ontario. His expertise is in residential and commercial real estate, wills and estates.

Get in Touch With Us

Thank You!
Your message has been sent successfully.